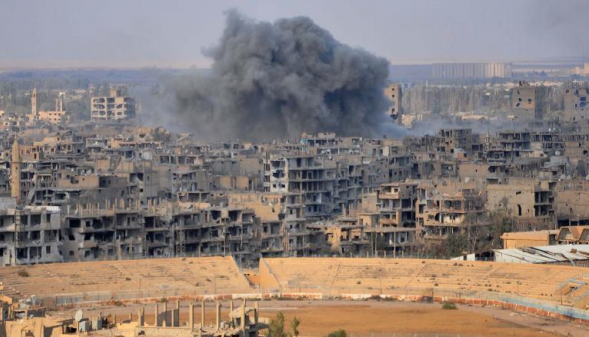 In 2011, following months of protest, armed insurgency commenced in Deir-ez-Zor, northeast Syria. Over the coming years the Syrian government began to cede territory to opposition groups. By late 2013, ISIS established itself as the principle rebel group in the area and imposed a siege on the city, operating predominantly out of schools and other public infrastructure in the surrounding areas.

However, in 2017, the tide of war changed following successive ISIS defeats in Iraq and north eastern Syria. The Syrian army was able to break the siege of the city from the west and the Syrian Democratic Forces advanced to the eastern bank of the Euphrates river. After five years of non-stop urban combat, much of Deir-ez-Zor governorate lies in ruins.

In the months since the cessation of active conflict in Deir-ez-Zor, the United Nations Organisation for the Coordination of Humanitarian Affairs (OCHA) estimate that 244,655 displaced people have returned to the governate. Many have come back to find their homes destroyed. Analysis shared by the United Nations Institute for Training and Research (UNITAR) notes that Deir-ez-Zor has the highest density of damaged buildings in the country after Raqqa and Homs. Nevertheless, it also has the highest density of reconstructed buildings, indicating a willingness of the local population to return and rebuild.[1]

Efforts to restore basic services and restore livelihoods are complicated however, with the governate remaining under the control of two separate administrations complicating efforts to re-establish basic services and restore livelihoods. While humanitarian aid has been directed to the province, a challenging operating environment remains owing to tensions between armed groups, explosive contamination, a difficult policy environment, limited scalability, and funding limitations. 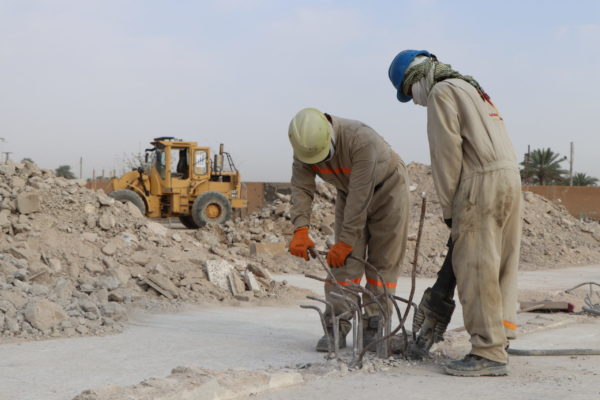 Managing this complex environment, Crown Agents Humanitarian team have been supporting Deir-ez-Zor’s road to recovery. To date, through working together with local implementing partners, we have cleared 44,000m3 of debris from 128 public buildings in Deir-ez-Zor, including 102 schools. The quantity of debris removed from public areas and sites roughly equates to the size of the US Capitol building. This has greatly impacted the lives of 311,000 local residents, including 37,000 school children and teachers, who are now able to access schools safely.

Project Director David Quinn, expands on why schools were the primary target for removing debris throughout this project:

“Schools became a specific target for IS in the final months of their hold in the Deir-ez-Zor region. Fearful of advancing forces using school perimeter walls as barricades, IS often had the walls destroyed. School yards are now littered with debris which poses a health risk to students and inhibits the resumption of educational activities. Clearing such waste from educational sites was therefore an important and visible step in restoring services in the recently liberated areas.”

Over 700m3 of hazardous materials were removed from the public sites, with Crown Agents coordinating the safe removal of explosive remnants of war. 78% of the debris has been recycled to rebuild roads and bridges, rendering positive, practical changes to how people in Deir-ez-Zor experience their built environment, after years of infrastructural devastation.

Interview with our Waste Management Expert

Recently, our teams sat down with Crown Agents’ debris clearance and waste management expert, Martin Bjerregaard  to answer questions about the project:

How do you begin to approach the clearance of debris and hazardous waste?

“Where hostilities have occurred in an urban city of Syria, the quantities of debris across the city can be significant and difficult to measure. It is important to tie the debris management into the ensuing recovery, rehabilitation and reconstruction works, so optimal reuse and recycling of the debris can be achieved at a local level. Often, it is required to ‘zone’ the affected areas to enable effective logistics, division of tasks and support management. For cities and urban areas of Syria for example, these ‘zones’ can be Neighbourhood boundaries.”

How can debris be used as an opportunity for long-term recovery in post-conflict environments?

“There are numerous ways in which debris management can support recovery approaches, since the removal of debris is a precursor to recovery activities being implemented – ie. a damaged building will need to be removed before reconstruction can commence. Livelihoods in particular, both temporary and sustainable, are a strong objective with early recovery measures. The handling, management, reuse and recycling of debris provides numerous opportunities to support employment and livelihoods.”

Crown Agents debris clearance and waste management activities comprised the largest cash-for-work scheme in the region. Providing employment, generous wages, safety training, recruitment transparency, sick pay, insurance cover for over 400 individuals from the most vulnerable households in which – for the vast majority – the scheme was the sole source of income generation. Follow up surveys with 200 of the 405 cash for workers, indicated that the majority spent their income on health-related items: 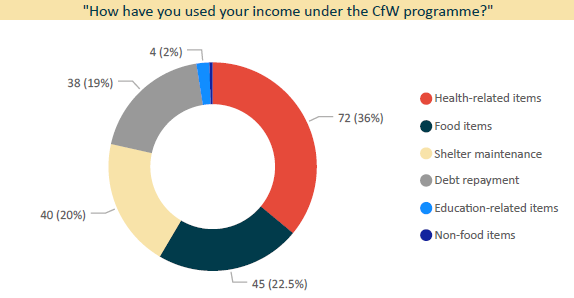 What are the implications of recycling debris? Why was this important for the project?

“In Syria, one of the biggest costs in debris management is transportation of the debris from the source to its disposal or treatment site. By reusing and recycling the debris close to the debris source, transport costs can be significantly reduced which in turn reduces the overall cost of recovery. In addition, the cost of raw materials following conflicts often increases significantly as reconstruction demands on the local quarries outstrips their supply. By using recycled debris (often cheaper than quarry materials when transport is considered) cost savings are also realised in the reconstruction phase. Thus, effective debris management can support key early recovery focusses for the post-conflict phase.”

What are the clearance principles used by Crown Agents?

The clearance of debris caused by the destruction of structures in conflict is one of the fundamental tasks associated with relief and recovery. Debris needs to be removed from roads, homes and public facilities before those returning can begin building normal lives. Guidance from the Emergency Shelter Cluster stresses that clearance activities must be undertaken with caution, as if disposed of improperly it can cause future hardships for the affected population[1]. The Cluster note the value of such debris as a source of building materials as well as the intrinsic value to the owner. Debris then, should not just be disposed of but collected, sorted and where possible, reused and recycled. Crown Agents therefore followed this procedure:

For further information about our post-conflict recovery work in Syria, including the restoration of urban lighting and waste management, click here.