Covid-19 has provided a window of opportunity to tackle corrupt procurement practices in healthcare systems across the world, according to leading anti-corruption expert Liz David-Barrett, Director of Centre for the Study of Corruption at the University of Sussex.

The University of Sussex’s Centre for the Study of Corruption has recently published a leading report investigating the impact of partnering with a specialist external agency for the administration of medicines procurement and how this can deliver rapid efficiency gains in the battle against corruption. Based on Crown Agents’ experience of working with the Ukrainian Ministry of Health, the report identifies opportunities for reform, which is especially relevant following the upheaval all health systems have experienced due to the Covid-19 pandemic. 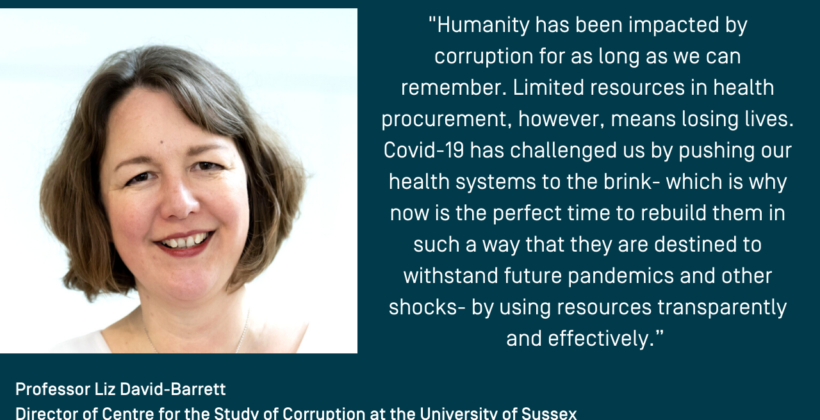 The procurement of medicines is a vital part of healthcare systems, but one which is highly vulnerable to corruption. The overall amount lost to corrupt practices in healthcare is estimated to be around $500 billion annually, and procurement is the biggest risk area.

The main cause of this vulnerability is the extreme complexity of the market, with medical regulations differing between countries and a lack of universal guidance on dosage or delivery mechanisms. All of this results in varying prices for medicines and pharmaceutical goods around the world, meaning it is difficult to achieve accountability.

However, that is not to say reform isn’t possible, and for governments and ministers looking to reform healthcare systems, medical procurement is often a good place to start. With the erosion of corrupt practices, multi-million-dollar savings can be achieved and set aside for further reforms, and patients receive the tangible benefits of improved access to medicines and medical devices.

In 2015, following the Revolution of Dignity, the Ukrainian government faced endemic corruption within the healthcare sector combined with an unprecedented rise in non-communicable diseases (NCD) within the population; this included over 140,000 citizens annually affected by cancer- that’s every fourth man and every sixth woman. The result of this corruption were extremely high costs for medicines and medical equipment, leaving many people unable to access the vital care they required.

Political mismanagement had led to just a handful of suppliers controlling the procurement of vital medicines in the healthcare sector and pushing up costs to unsustainable levels. The Public Procurement Reform for the Ministry of Health of Ukraine began in 2015 when Parliament passed a law under which the procurement of medicines was transferred to international organisations, including Crown Agents. By outsourcing the procurement of medicines and medical devices, the domination of supply by a handful of organisations was replaced with a competitive and transparent bidding system. This has driven exceptional price performance to deliver millions of vital drugs to patients in need of access to quality medicines.

Crown Agents sustainable, tailor-made end-to-end supply chain solution has saved the Government of Ukraine $65.7 million over five years, which was 25% of the total programme budget. Over the last four years, Crown Agents has also cut the cost of cancer drugs by nearly 40%, ensuring Ukrainians suffering from this devastating disease can access free treatment.

Based on in-depth interviews with stakeholders representing all aspects of the process – government, civil society organisations, external implementers, and medicines suppliers – the report from the University of Sussex seeks to inform decision-makers involved in reforming medicines procurement and pave the way for political and technical reform.

With the creation of a ten-point action plan for reformers, the report offers clear lessons for those seeking to reform medical procurement and drive forward life-saving changes in their healthcare systems. 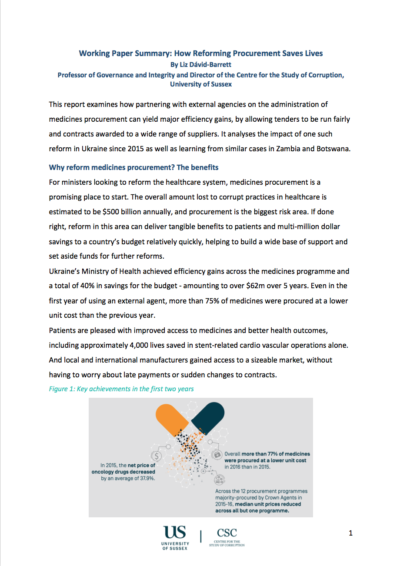 Working Paper Summary: How Reforming Procurement Saves Lives. By Liz Dávid-Barrett, Professor of Governance and Integrity and Director of the Centre for the Study of Corruption, University of Sussex. PDF (1 MB) 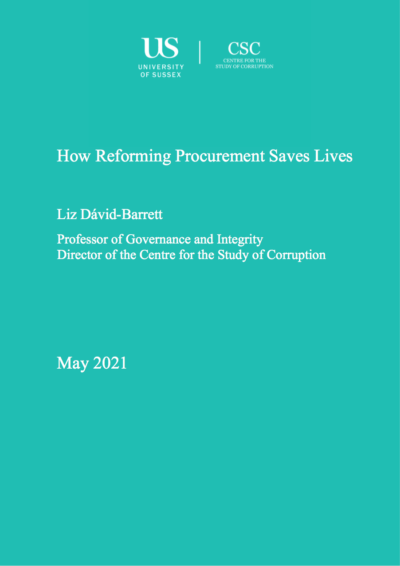 Working Paper: How Reforming Procurement Saves Lives. By Liz Dávid-Barrett, Professor of Governance and Integrity and Director of the Centre for the Study of Corruption, University of Sussex. PDF (5 MB)