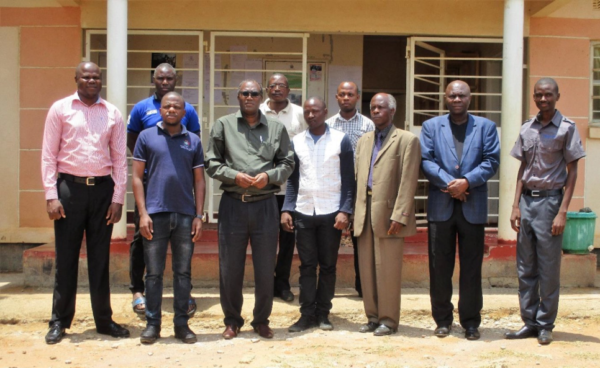 Nicholas Chipasha (far right) with colleagues from the Mafinga District education and health offices and USAID/AGIS officials at the project launch in November 2018.

When Nicholas Chipasha was appointed to act as District Planning Officer for the Mafinga District Education Board (DEB) in 2018, he was overwhelmed by the magnitude of his new role. Nicholas, a former secondary school mathematics teacher and school planner, was responsible for reporting on all DEB programs. But he had limited knowledge of management and finance.

Initially, with only superficial knowledge of the public service operating system, he focused mainly on the Planning and Information Unit, often neglecting other sections because he did not fully understand how they were linked to his work. He had poor budget tracking skills and avoided procurement, stores, and audit work because he didn’t know the dos and don’ts of Public Financial Management (PFM). This made his work very challenging.

But this year, Nicholas took part in PFM training through the USAID Accountable Governance for Improved Service Delivery (USAID/AGIS) project and its work with the Mafinga DEB.

The USAID/AGIS project, operating from 2017-2022 and implemented by Crown Agents, aims to increase government transparency and accountability in the delivery of health and education services at the Ministry of Health (MoH) and Ministry of General Education (MoGE). With a $7.3 million investment from the United States Government, the project is being implemented in six districts selected from Zambia’s Eastern, Lusaka, and Muchinga provinces.

After having attended the training,  Nicholas made the following observations: “USAID/AGIS gave me a rare opportunity to bury all the potholes I was experiencing in my line of work, particularly in project management, management of public funds and policy implementation.”

Mafinga is one of the farthest flung districts in Muchinga Province. Situated 232km from Chinsali, the provincial capital, it has poor road infrastructure and limited telephone and internet connectivity. It is not connected to the central power grid and lacks banking services.

USAID/AGIS rolled out its first PFM training sessions at the Mafinga DEB in June 2020. The courses were virtual and based on skills gaps identified during the project’s PFM capacity assessments at the DEB the previous year. They covered finance, human resource management, procurement, and internal audit. Nicholas participated in all the sessions.

Now, Nicholas is no longer foiled by budget tracking and is up to date with the Public Financial Management Act No. 1 of 2018 and the public procurement process. Nicholas has become an efficient leader, making informed decisions and effectively managing two donor projects in Mafinga.

He also feels more confident and empowered at work, and he is conscious of the important role he plays in his community. “I have learned that as much as I am accountable to my supervisor, I must be more accountable to the people I am offering my services to. They may not be privileged to be where I am or do what I am doing, but I am there to serve them, and they are free to question my services and demand answers if they are not satisfied.”