With the first 100 days of Ethiopian Prime Minster Abiy Ahmed’s premiership drawing to a close, his determination to drive much-needed change in the country has been lauded both within Ethiopia and across the globe. The newly elected Prime Minster, who at 42 is Africa’s youngest head of state, has thrown himself into reform. Already his administration has lifted the state of emergency, privatised key companies like Ethiopian Airlines and made the decision to re-engage with Eritrea after a conflict that has spanned decades. As this momentum continues, the international community must be thinking about how to commit to matching this injection of pace.

I saw the optimism that is sweeping Ethiopia first-hand during a trip to Addis Ababa a few weeks ago. The trip was the latest in many visits I have made the to the country over the last decade, first with Save the Children and now with Crown Agents. This time round change was clearly evident. The light rail tram system that connects the city is only a couple of years old and made for a striking contrast with previous visits. Ethiopia is clearly at a critical moment, and one that leaves many Ethiopians hopeful of change. Yet for all this excitement it is essential that the international community engages in a way that lays the right foundations for sustainable growth for all. The nature of this engagement must be two-fold; firstly, through supporting the Ethiopian government in the delivery of effective public services and second through ensuring Ethiopia has the platform to engage with international institutions like the World Trade Organization.

Reform is much-needed in Ethiopia after years of under  investment in public services, rising debt levels and political protests. Ethiopia is one of the fastest growing economies in the region, but also one of the poorest, with a per capita income of $783. Traditionally, the Ethiopian economy has lagged behind East Africa’s regional economic powerhouse, Kenya. But with growth rates on the up, poverty rates that have dropped by more than a third since the turn of the millennium and a raft of infrastructure investment from China, this picture is beginning to change. 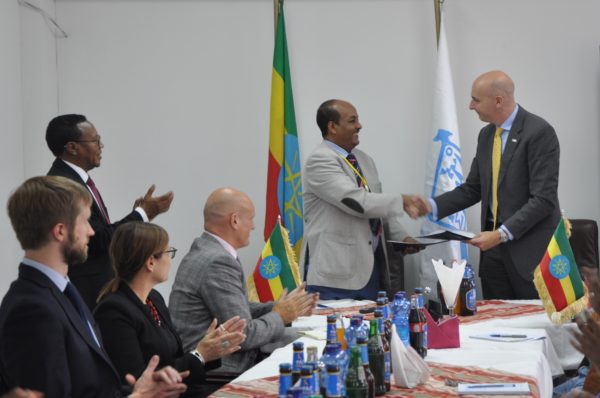 Strengthening the systems and processes of government is a key part of ensuring Ethiopia’s growth is sustainable. Crown Agents is proud to have played a role through our procurement work with the Ethiopian government. Over a decade ago, we worked with the Ministry of Finance and Economic Cooperation to develop the country’s first set of standardised bidding documents, and most recently worked with the Public Procurement Association to develop competency frameworks and training courses. Yet getting the systems and processes right will only result in lasting change if this goes alongside investment in human capital. Our training and professional development arm have worked with individuals and institutions across the public and private sector and have trained staff from all of the 17 private and public banks in the country. Most recently, we signed a memorandum of understanding with the Ethiopian Management Institute, a partnership that will help to accelerate the government’s transformation strategy.

Boosting the capacity of the Ethiopian government allows the country to engage increasingly as a partner with traditional donor states, shifting the traditional donor-recipient relationship to a more equal footing. The UK government is leading the way in this regard with the forthcoming launch of its first Africa strategy, a vision that takes a bold cross-government approach and looks as far ahead as 2030. Ethiopia has long been a recipient of UK aid, but this integrated approach makes for better partnership between the UK and Ethiopia, and I for one am looking forward to the role that Ethiopia will hopefully play within it as an increasing regional success story.

Alongside driving good government, the international community must ensure Ethiopia is given a platform to engage with other states both in Africa and globally. China’s decision back in 2009 to invest in a new African Union building in Addis boded well in this regard, with the construction of the impressive headquarters a move that helped to further cement Ethiopia as a leading voice on regional issues. Yet the international community must work to amplify the country’s voice on the global stage, namely through offering African countries a place at the table in the major financial and global institutions. Membership of the World Trade Organisation (WTO) is one such example that has long eluded Ethiopia. The country first formally submitted it’s request to join fifteen years ago and negotiations are on-going about it’s accession status. With the increasing interconnectedness of trade and shifting geopolitical dynamics globally, it is imperative that nations like Ethiopia are given a seat at the table.

The changes we have seen over the last few months mark a critical moment in Ethiopia’s history. With a political energy not seen in decades, now is the time for the international community to commit to supporting the new administration in accelerating greater prosperity for all.