Schistosomiasis is a parasitic infection which is endemic in about 54% of the 290 sub-counties in Kenya with approximately 6 million people are at risk of infection.

The cornerstone of current schistosomiasis control, as per the WHO guidelines, is preventive chemotherapy with Praziquantel, targeted towards school-age children (SAC) and specific high-risk groups in endemic areas. Despite these efforts, this approach results in pre-SAC, out-of-school children, street-connected persons and older people still being systematically excluded. Exclusion of these population groups likely leads to Schistosome reservoir and may promote the continued transmission of schistosomiasis. Previous campaigns to target schistosome infections have been inconsistently implemented with coverage below the threshold to control transmission with adults and children out of school systematically left out and not receiving treatment.

In Africa, the number of persons for whom the streets play a significant role in their everyday lives and social identities, street-connected people, has become an increasing phenomenon in recent years. These people suffer from many health issues due to their living environment, their health seeking behaviour is low and access to health care services remains challenging. Just like other people, they too have the right to good health. The 2018 national census of street families conducted by the Ministry of Labour and Social Protection reports 7,529 (69% male; 31% female) street-connected persons in Mombasa, second largest number in Kenya after Nairobi county, which hosts 15,337 street persons. This large number of people are also exposed to the risk of schistosomiasis infection by living on the streets often without appropriate sanitation and water. If left untreated, they would continue to contribute to disease transmission, despite continued control efforts in the rest of the urban population. Therefore, control efforts will be more effective if this potential reservoir of infection is also included in preventive treatment.

In the Ascend program we aimed to ensure engagement of street-connected persons in the planned MDA activity and enhance the existing knowledge on ways to include these populations. As part of this effort, this a scoping review was done to identify, design and implement mechanism for awareness creation and drug distribution to the street-connected persons during a community wide mass drug treatment in Mombasa County.

Read the full learning brief: Leave no one behind: Reaching people connected to the streets in Kenya with Schistosomiasis health information and preventive medication below. 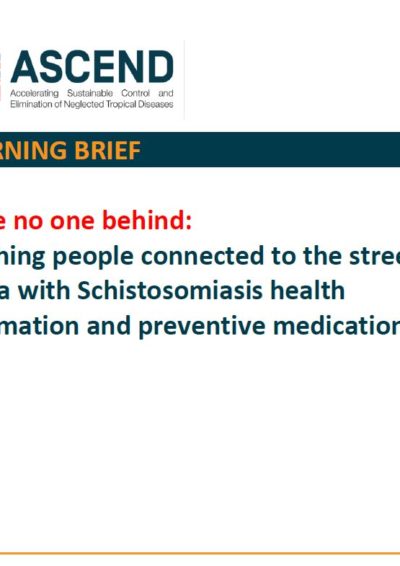