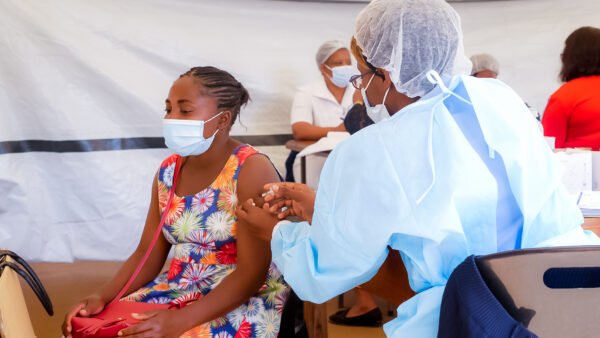 As we enter the third year since the start of the Covid-19 pandemic, what started out as a race against time to buffer health service delivery against disruptions – such as health care worker shortages, surges in sick patients, supply chain disruptions, and restrictions in movement; moved to the introduction of an effective vaccine that reduces risk of morbidity and mortality; now the focus has transitioned to mass vaccination efforts which are seen as a viable route to returning to ‘normality’.

For many countries, particularly in the developed world, high vaccine coverage across populations has seen a progressive return to normal with restrictions being lifted. The World Health Organisation released the Strategy to Achieve Global Covid-19 Vaccination by Mid-2022 in October 2021 recommending that by mid-2022 70% of the world’s population should be fully vaccinated so as to increase population immunity globally and lower risk from new variants. However coverage has not been equitable across the globe. For example, only 22% of the African population have been partially
or fully vaccinated compared with 79% of the US and Canadian population and 69% of the European population. Many African countries are still in single digits percentage coverage.

The surge in infections at the start of 2022 due to the Omicron variant and more recent uptick in cases in some countries due to the BA.4 and BA.5 sub-variants2 poses a stark reminder of the ongoing threat by the evolution of the SARS-CoV-2 virus and reinforces the critical need to achieve high levels of immunisation coverage in all countries. The shift from pandemic to endemic means that the disease will always be with us but does not necessarily mean it becomes mild or that it can’t cause significant mortality, especially among vulnerable populations. Similar endemic diseases such
as seasonal influenza has been estimated to kill up to 650,000 people each year.

The last three years have highlighted the pressing need to boost the resilience of health systems, particularly in low- and middle-income countries, to enable them to prepare for future outbreaks. Crown Agents has been at the forefront of the fight against Covid-19 since the beginning, initially working to ensure governments and partners gained access to much needed PPE and testing equipment. We also supported the reorganisation of health service delivery at facility and community levels, so that essential health services did not shut down. We then managed the distribution of the Pfizer vaccine, followed by millions of doses of other vaccines, to over 11
countries in some of the most remote places on the planet, such as Antarctica. We’ve also supported governments with technical support in the preparation of their National Vaccine Deployment Plans, have undertaken catch up campaigns to increase coverage, acted as monitoring agents on behalf of the COVAX facility and as a technical vaccine advisory firm in Central East Asia.

This learning brief synthesises key lessons from Crown Agents global experience working across different programmes throughout the pandemic to date. Read the full article below. 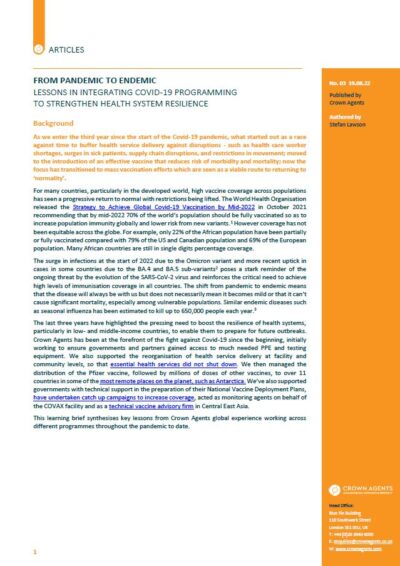