On 29 June, the Health Pooled Fund, together with the Ministry of Health launched the distribution of emergency medicines and medical supplies at the organisation’s warehouse in Juba.

Minister of Health Dr Riek Gai Kok was among the invited guests and while addressing the audience, thanked the Health Pooled Fund’s donors.

In the coming weeks, 880 metric tonnes of medical supplies will be distributed throughout South Sudan both by road and air.

“There is no better time for this celebration, especially during the rainy season, when malaria and chest infections are on the rise,” the Minister of Health said.

“We are connected by humanity and with today’s intervention, we are doing something for the people of South Sudan. In this difficult time of nation building, we see that you have not abandoned us,” he continued. 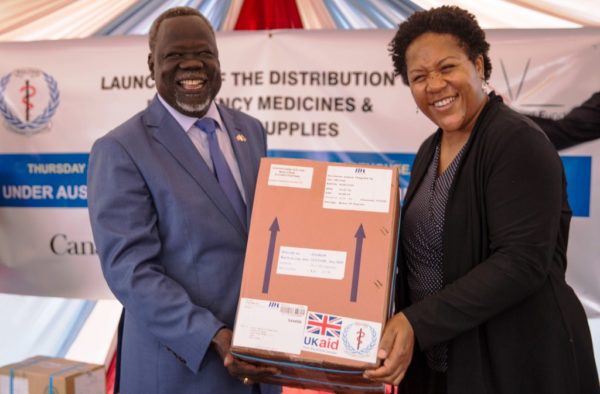 The distribution is targeting 1,403 facilities throughout South Sudan, providing hospitals and smaller health posts with life-saving medical supplies such as antibiotics, vitamins and latex gloves, among many others. A total of 68 line items have been selected between donors and the Ministry of Health and are shipped out in bulk.

“These are aimed to treat patients even in the most remote parts of the country,” explains the Health Pooled Fund’s Head of Operations Mick Robson.

“We have made two similar distributions in the past year and are aiming to deliver even more supplies in the coming months,” he adds.

With tough logistics in South Sudan, round-trip deliveries can take up to two weeks and have to be planned thoroughly.

“Before we send the trucks out, we need to ensure we have the correct paperwork. We also coordinate with local teams on the ground throughout the country to guarantee safety,” explains Distribution Manager Brian Bloor.

Following the ceremony and symbolic hand-over of supplies, the Minister of Health, together with his Undersecretary Dr Makur Kariom, visited the warehouse – the biggest in South Sudan – accompanied by representatives from Canada, the United Kingdom and the United States. The delegation learned about the different shipments and was able to witness the loading of delivery trucks.

“This is our biggest distribution yet and the drugs we are supplying are absolutely essential and life-saving,” Mick Robson said.

The Minister of Heath ended his address with a warm “thank you to the donors and their governments.”