In February 2022, the South African Presidency received the second part of the report of the Judicial Commission of Inquiry into Allegations of State Capture, Corruption and Fraud in the Public Sector.

The Commission, better known as the Zondo Commission or State Capture Commission, is a public inquiry established in January 2018 by former President Jacob Zuma to investigate allegations of state capture, corruption, and fraud in the public sector in South Africa, resulting in corrupt or unethical practices in South Africa’s public procurement systems.

President Ramaphosa outlined the handover of the report as a significant step forward in the work to be done to rid South Africa of corruption and take the necessary steps to protect public resources.

Offering an in-depth account of the political exploitation and destabilisation of state-owned enterprises and public entities, one of the key recommendations made by the Commission is the creation of a Public Procurement Anti-Corruption Agency, stating that “the appropriate starting point for any scheme of reform must include the establishment of a single, multi-functional, properly resourced and independent anti-corruption authority with a mandate to confront the abuses inherent in the present system.” This recommendation follows the proposal put forward in the draft Public Procurement Bill in 2020 for the creation of a Public Procurement Regulator in South Africa.

There is clearly a need reform, but the question facing procurement professionals now is how best to take these ideas forwards?

Next steps: where to go from here

Drawing on our experience of supporting countries around the world to modernise their public procurement practices, Crown Agents will be hosting an open webinar on 7th April to discuss the proposals put forward in South Africa. Together with the African Procurement Law Unit and the Open Contracting Partnership, we will be sharing our experiences of supporting many countries across the African continent and beyond to undertake similar reforms.

For over 185 years, we have worked with governments, institutions and development organisations around the world to strengthen their procurement systems to act as a foundation for cost-effective service delivery. Through our experience of supporting clients in over 20 countries to implement reforms, we have amassed the skills to effectively guide them through the various challenges and difficulties of the process. 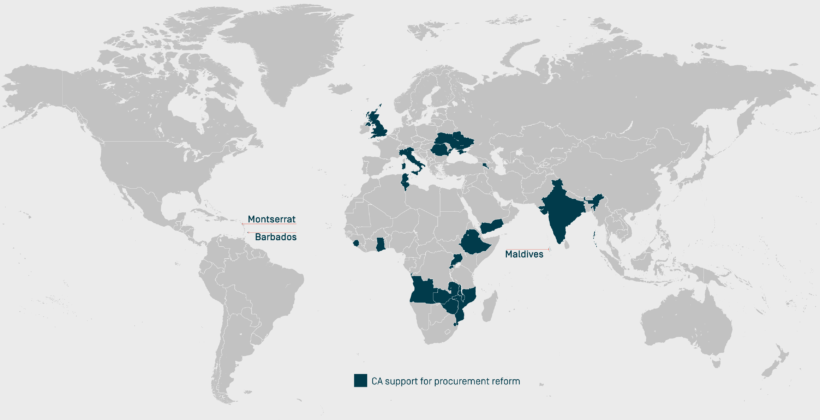 Why do procurement systems need to be modernised?

Reports from organisations such as the World Bank put the annual public procurement spend at between $11-13 trillion, and it often makes up one of the largest areas of government expenditure. It is therefore crucial that this money is spent effectively. A strong procurement system, built on sound ethical principles, is fundamental to the effective and accountable use of funds, whether these are used for operating or capital expenses, health and educational services or high-impact infrastructure projects.

In the webinar, our Director of Procurement, Steve Guppy, will outline some of the top tips for effective procurement reform that we have developed over our years of experience. Joining an expert panel of leaders from existing procurement authorities in Africa and beyond, he’ll discuss how Crown Agents has supported governments and organisations to overcome the risk of waste, fraud and corruption in their procurement systems.

Some of topics to be covered include the regulatory architecture for establishing such an oversight institution, the suggested scope and remit of procurement regulators and oversight bodies, and the challenges of monitoring compliance and performance.

Our expertise lies in improving value for money, transparency and accountability in public procurement systems, and we have worked around the world achieve this, including with some of South Africa’s near neighbours such as Angola, Botswana, Eswatini, Malawi, Mozambique, Zambia and Zimbabwe.

Through this experience we’ve developed a wealth of knowledge of how best to help governments and organisations implement practical solutions to procurement and supply chain challenges, improve efficiency and ensure value for money in public procurement. To hear more about our work and the lessons we have learnt, join us on the 7th April for a lively debate on all things public procurement.

Workshop on Public Procurement Authorities in South Africa: Join us on 7th April

Workshop on Public Procurement Authorities in South Africa: Join us on 7th April